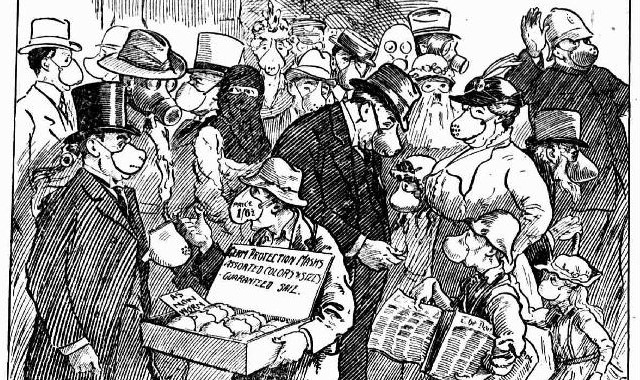 With long lockdowns to look forward to there’s always a temptation to ask how we can possibly deal with an unprecedented situation.

However the Australian press from 100 years ago contains many parallels from the last big pandemic which somehow makes things seem a little less daunting: gripes about health restrictions, misinformation, interstate recriminations, sceptics, quack cures, and even social media influencers are all there.

It is stated by the Director-General of Health (Dr. Paton) that the complete immunity afforded by vaccination against smallpox cannot be promised in the case of the present disease. The belief is, however, that vaccination in the present case will afford a certain amount of immunity and lessen complications. The State laboratory is still engaged in the production of vaccine, a fairly large quantity of which has now been distributed.”

The Health Department has prepared a number of S.O.S. cards, following the New Zealand example; and if there should be an outbreak in any suburb cards will be sent out, and will be distributed to the residents, any of whom if stricken can place the card in their window.”

Masks in school and remote learning

“Early in 1919 the worldwide influenza epidemic, which was fatal for many, many people, hit Australia. We used to go to school wearing gauze masks, and on arrival at school congregated in classrooms and were subjected to atomiser spraying of eucalyptus oil, or something of the sort. Later the epidemic became so serious that the school closed down and we were sent correspondence lessons.”

“Travellers by boat or train must now obtain a medical certificate that they are not suffering from pneumonic-influenza before they are allowed to proceed on their journey, in addition to signing a declaration that they have not come into contact with an infected person, have been inoculated and passed through an inhalation-chamber.”

“Had even the outbreak of a few months ago in New South Wales been properly investigated it is more than likely that the authorities would now be in a position to handle the present situation with the confidence and knowledge that are so lamentably lacking… The authorities in New South Wales were probably blissfully ignorant of any epidemic because influenza was not a ‘notifiable’ disease. Until a proper official form is duly filled in and posted to some individual behind a desk the public health authorities cannot take cognisance of anything. Our alert authorities in Victoria were ‘vaguely’ aware of something that was happening in New South Wales, but, not having been duly ‘notified’ on official forms, had nothing to do with the matter.”

“Doctor Charles Duncan, at a convention of the American Medical Association, reported a cure for influenza. He said one drachm of infected mucus pasteurized in filtered water, if injected subcutaneously, would effect a spontaneous cure of Spanish influenza or pneumonic catarrh.”

“The noted Swedish physician, Professor Bjorson, claims that Spanish influenza can be cured by exposing the patient’s back to a strong electric heat and light appliance, followed by the application of heat compresses, by which an intense perspiration is induced. ….

Hugh Manning, 38, carpenter, John Thompson, 38, wood and coal merchant, and George McLean, 61, seaman, were, at the Central Police Court this morning, charged with not having worn masks while they were in the public streets. …

It was stated in evidence that defendant ‘[James Lamb] took off his mask while on the way to the police station saying he would not wear it. … The evidence of the guard of the tram was that on Saturday afternoon he noticed defendant [Mr Munter] sitting in a smoking compartment with his mask off and smoking a cigarette. Sergeant Surridge stated that when he told the defendant he would have to come to the police station he said “All you people in New South Wales are mad”” 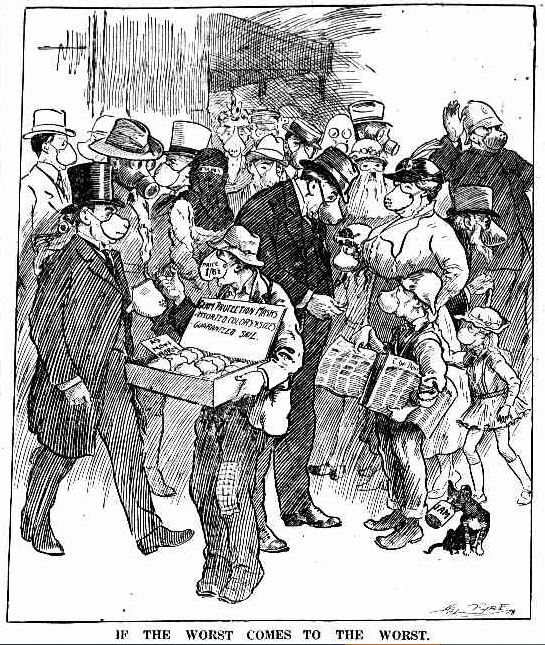 “There has been ample opportunity of studying influenza in South Africa. It swept through the white and colored population there like a blizzard through a field of corn.

A Royal Commission was appointed to investigate the epidemic. It came to the conclusion that evidence regarding the utility of vaccines was so controversial that it was impossible for the Commission to make definite recommendations.

All the Commission would say was that the vaccines, when properly used, caused no ill-effects — which might be said with equal truth of an injection of cold water. So dubious, indeed, was the South African Commission about the merit of vaccines that the report strongly deprecated any recommendation by the Government regarding the use of vaccines, the utility, or at least the harmlessness of which had not been thoroughly and successfully established. Much the same attitude has been taken in America with regard to the experience of inoculation in that country.”

‘Cure is worse than the disease’ proponents

“The business community and the working population are both enduring severe loss because of the restrictions enforced. If the disease must take its course, of what avail to prohibit race meetings, close theatres and picture shows, public schools and churches, and, by that action, create the very panic it is most desirable to avoid?

The disease, we are told, must exhaust itself. Really effective precaution is impossible, because we must live and the business of the world must go on. Most of the vexatious regulations which Sydney now endures have been tried elsewhere and proved an absolute failure. If that be so why make life a martyrdom in the vain hope of evading an enemy who, no matter what we do, must take his toll?”

‘We need a proper investigation of the origins of the pandemic’

“It was strongly urged that some authority should make an exhaustive bacteriological examination and settle once and for all the relationship between the common influenza colds and the serious form which recurs after certain periods of years. ‘Up to date,’ says the medical officer of the Nestor, ‘this apparently has not been done. We are still in the dark absolutely as to the factors which make the cause, especially if it is of this slight original character, so virulent.

We do not even know for certain whether the two are actually connected, and yet all are lumped together under the term influenza. It is now called ‘Spanish’; it was then called ‘Russian,’ ‘Chinese,’ simply because of the place in which it first showed itself in virulent form.’”

“The diva laughed merrily, and acknowledged that she felt stronger than when she sailed away in January, 1919, and that the dangerous attack of Spanish influenza at Monte Carlo had left no weakness behind it.

“My illness at Monte Carlo was exceedingly serious, and my life was only saved under Providence by the skill of the physicians who came from London to attend me. Yet on my recovery I sang several times in opera at the Casino Theatre, and was assured by the Press critics that I revived the happiest recollections at the same house of my predecessors in the world of song Adelina Patti and Christine Nilsson.””

How long will it last?

To what extent this will affect the duration of the present epidemic it Is impossible to say. But the history of Spanish influenza, or pneumonic influenza, In other countries has been almost identical with that of influenza In Its older manifestations. In Munich, where the 1890 epidemic affected 45 per cent of the population, the records show that it took exactly 30 days to reach its maximum virulence and 30 more days to return to normal.”

How long it actually lasted

“In his report on the outbreak, Dr Armstrong stated that on October 25, 1918, a vessel arrived In Sydney from New Zealand with cases of influenza on board, and shortly afterwards other infected ships reached Sydney. The quarantine authorities warned off the introduction of the disease during the following three months, as It was not until January 23, 1919, that the first case occurred on shore.

The invasion of Australia first took place through Victoria, from which it spread throughout the continent. The toll of life taken by the epidemic In New South Wales was extremely large, there being 6244 deaths [NSW population 1.9m in 1919]. The actual mortality rate was not extremely high, added Dr Armstrong, in the metropolitan area approximately 290,000 cases occurred, or 36.6 per cent, of the whole population, while the total number of deaths In the same area was 3002, or 1.3 per cent of those attacked.

In New South Wales the epidemic developed In two waves, the first of which reached its height in the middle of April, and was the most severe in type, but as it affected fewer people than the second wave, it was not accompanied by so many deaths. The peak of the second wave was attained about June 20 or June 21, and the epidemic finally came to an end in the closing days of September.

Difficult as things look today, of these two pandemics today’s would definitely be the one to live through.